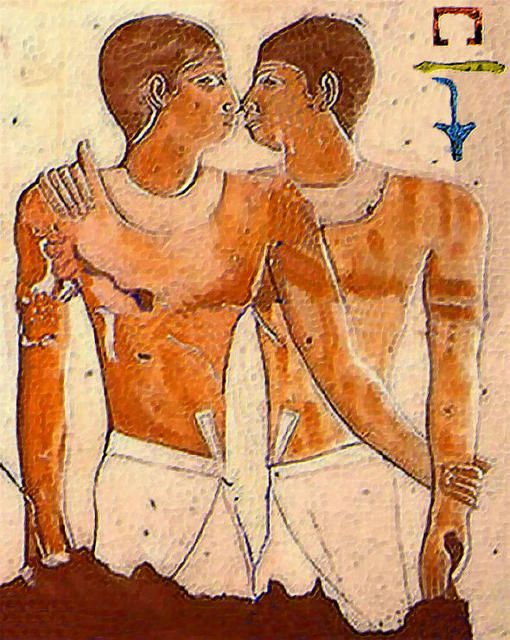 Construct an essay on Niankhkhumn and Khnumhotep on homosexuality

The Old Kingdom tomb of two men named Niankhkhumn and Khnumhotep at Saqqara has been cited as the earliest documented evidence for a same-sex couple, despite the fact that our understanding of society’s acknowledgment and identification, much less the acceptance of, homosexuality is extremely limited. (And despite the fact that their tomb is also the resting place of both of their wives and their children and grandchildren are mentioned in the tomb too!)

Construct an essay on this topic by responding to Chapter 15 (p. 205-217) in our textbook: Wilkinsons’ The Egyptian World plus the following 4 articles (PDFs can be found in the Essay menu on Blackboard) on the tomb and what we know of homosexuality in ancient Egypt, compose an essay that argues whether or not Niankhkhumn and Khnumhotep should be viewed as a same-sex couple, taking into consideration Egyptian cultural and social views on gender and sexuality.

The tomb of royal manicurists Khnumhotep and Niankhkhnum was discovered by Egyptologists in 1964. Described in the hieroglyphics as “royal confidants,” the men were among the privileged few people who were actually permitted to touch the pharaoh. Dating from the Fifth Dynasty of King Niuserre, the tomb depicts two men in a manner usually reserved for husband and wife. In one striking portrayal, the two embrace – noses touching – in the most intimate pose allowed by canonical Egyptian art.

They are believed by some to be the first recorded same-sex couple in history. Though homosexuality was not uncommon in Ancient Egypt, the exact nature of the relationship between the two men is nearly impossible to discern since no evidence exists beyond the imagery in the tomb. The presence of their wives and off-spring in certain panels among the glyphs has led many Egyptologists to conclude they were siblings.

But repeated depictions of the two men embracing have convinced many that their intimate relationship might have been accepted by their respective wives.  One thing is certain: two men of equal social standing being buried together in the same tomb – in spite of the fact that they were undoubtedly married to women – was unique.

That this remarkably preserved archeological find is one of the largest and most beautifully decorated tombs in the Saqqara necropolis also suggests that whatever the nature of their relationship, the pharaoh approved of it because tombs of this caliber were enormously expensive. The mystery may remain forever locked in the mixed messages of the tomb’s hieroglyphics, but the words the men chose to have inscribed over the entrance are unambiguously clear: “JOINED IN LIFE AND JOINED IN DEATH.”