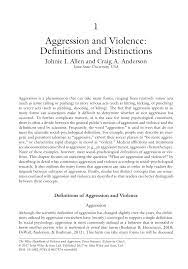 Consider your definition of aggressive behaviour

Lecture Exercise #8 – Please submit your responses to the following questions using the drop box below.  This assignment is worth 4% of your final grade.  Comment on each of the issues listed below.  Full marks will be given for thorough responses that explain your thoughts and beliefs about the topics.

2. What kind of people become torturers?

Most people imagine that only “monsters” or psychopaths can routinely humiliate, torture, or murder others. In fact, numerous studies in social psychology have shown how everyday, “normal” people can commit unthinkable acts caused by the step-by-step power of the situation. Many of the same mechanisms manipulated in laboratory studies have been shown to underlie the origins of human torture and slaughter (Staub, 1989).

In one study, Gibson and Haritos-Fatouros (1986) investigated the procedures used to train Greek military police to become willing torturers. They discuss such foot-in-the-door techniques as the following:

recruits endure torture and scream chants about violence and killing

Discuss: what psychological mechanisms (e.g. cognitive dissonance,upward/downward social comparisons, stereotyping) are at work here? What can ordinary people do to prevent themselves from becoming complicit in harming others?

Staub, E. (1989). The roots of evil: The origins of genocide and other group violence.  New York: Cambridge University Press.

This document is one of four reports produced as part of a research project the ICRC
asked us to carry out with a view to examining two questions. Firstly, what determines
the behaviour of combatants in wartime and, more specifically, what makes them
respect or violate international humanitarian law? Secondly, are the ICRC’s strategies
for inducing combatants to respect the law appropriate and can they actually influence
behaviour, and not just knowledge or attitudes?

The project was carried out with the assistance of the Faculty of Psychology and
Educational Sciences of the University of Geneva using data gathered from thousands
of combatants and civilians during the ICRC People on War study launched in 1999.
This information was supplemented by interviews with hundreds of other combatants
– both former ones and active ones – in several countries at war.

The examples of violations cited in this document are in no way intended to single out
particular countries or warring factions for criticism. Their only purpose is to illustrate
types of behaviour that were prevalent in past wars and are still common today.
This research would not have been possible without the help of many ICRC staff
members, both in Geneva and in the field, to whom we extend our sincerest thanks.

We are also deeply grateful to all the people from outside the organization who provided us with their stimulating opinions and points of view, in particular the professors Willem Doise and Gabriel Mugny and their colleagues at the Faculty of Psychology
and Educational Sciences of the University of Geneva, Reto Hadorn, sociologist at
SIDOS (Swiss Information Service and Data Archive for the Social Sciences), JeanHenry Francfort, communications specialist, Christian-Nils Robert, professor ofcriminal law at the University of Geneva, Michel Caraël from UNAIDS and Suren
Erkman, scientific consultant.