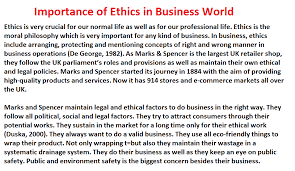 Complete a review on the importance of ethics and morals in a non-profit. Be well organized and written – use spell and grammar checks. Use at least 5 references and proper citations.

Complete a review on the importance of ethics and morals in a non-profit.

Be well organized and written – use spell and grammar checks.
Use at least 5 references and proper citations.
Clearly articulate why what you are doing is important, how it contributes to our understanding, and what we can learn and use from your work.
Clearly identify a purpose/research question and the method you use to address the purpose of question.

Those who work on issues of ethics are among the few professionals not suffering from the current economic downturn. The last decade has brought an escalating supply of moral meltdowns in both the for-profit and the nonprofit sectors.

Corporate misconduct has received the greatest attention, in part because the abuses are so egregious and the costs so enormous. Chief contenders for most ethically challenged include former Merrill Lynch & Co. CEO John Thain, who spent $1.22 million in 2008 to redecorate his office, including the purchase of a $1,400 trash can and a $35,000 antique commode, while the company was hemorrhaging losses of some $27 billion.

Still, the corporate sector has no monopoly on greed. Consider EduCap Inc., a multibillion-dollar student loan charity. According to Internal Revenue Service records, the organization abused its tax-exempt status by charging excessive interest on loans and by providing millions in compensation and lavish perks to its CEO and her husband, including use of the organization’s $31 million private jet for family and friends.

Unsurprisingly, these and a host of other scandals have eroded public confidence in our nation’s leadership. According to a CBS News poll, only a quarter of Americans think that top executives are honest.

Even executives themselves acknowledge cause for concern. The American Management Association Corporate Values Survey found that about one third of executives believed that their company’s public statements on ethics sometimes conflicted with internal messages and realities.

And more than one third of the executives reported that although their company would follow the law, it would not always do what would be perceived as ethical.

Employee surveys similarly suggest that many American workplaces fail to foster a culture of integrity. Results vary but generally indicate that between about one-quarter and three-quarters of employees observe misconduct, only about half of which is reported.3 In the 2007 National Nonprofit Ethics Survey, slightly more than half of employees had observed at least one act of misconduct in the previous year, roughly the same percentages as in the for-profit and government sectors.

Nearly 40 percent of nonprofit employees who observed misconduct failed to report it, largely because they believed that reporting would not lead to corrective action or they feared retaliation from management or peers.

Similarly, a 2006 Harris Poll found that only one in 10 Americans strongly believed that charities are honest and ethical in their use of donated funds. Nearly one in three believed that nonprofits have “pretty seriously gotten off in the wrong direction.”

These public perceptions are particularly troubling for nonprofit organizations that depend on continuing financial contributions.

Addressing these ethical concerns requires a deeper understanding of the forces that compromise ethical judgment and the most effective institutional responses.

To that end, this article draws on the growing body of research on organizational culture in general, and in nonprofit institutions in particular. We begin by reviewing the principal forces that distort judgment in all types of organizations.

Next, we analyze the ethical issues that arise specifically in the nonprofit sector. We conclude by suggesting ways that nonprofits can prevent and correct misconduct and can institutionalize ethical values in all aspects of the organization’s culture.