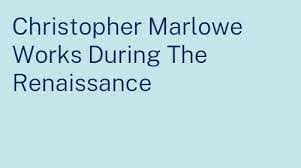 Compare Iago from Shakespeare Othello and Mephistopheles from Christopher Marlowe’s Dr. Faustus. What motivates each villain, and what strategies does he employ to accomplish his objectives?

Compare Iago from Shakespeare’s Othello and Mephistopheles from Christopher Marlowe’s Dr. Faustus. What motivates each villain, and what strategies does he employ to accomplish his objectives? To what weaknesses of character in his victim does each villain appeal?

Use quotes directly from text to support claims.

More specifically, even a cursory analysis of these points of comparison in “Othello” and “Doctor Faustus” reveals strong connections between the themes and presence of the motifs of villains (evil characters who seem to live only to destroy the lives of others) as well as the constant presence of the idea of sin. In fact, sin as a concept or motif in both “Doctor Faustus” and “Othello” does a great deal to comment upon characters who are evil villains and the these two structures in both “Faustus” and “Othello” play off one another, thus making these two plays very similar and ripe for a comparison more thorough than one might initially expect could be possible with such different plots.

The seven deadly sins were a vital part of Elizabethian literature and if not personified directly (as in the case of Marlowe’s “Doctor Faustus“) they at least comprised the more general structure of plot. In Shakespeare’s Othello, the central action of the play is based on the manipulation and acting out of the seven deadly sins by Iago, whose actions determine the final tragic outcome.

One scholar posits the idea that Othello echoes “something of the structure of a morality play, with Othello caught between Desdemona and Iago, the good angel and the evil angel” (Hunter 163). While the idea about this play existing as a genuine morality play can be debated, the fact remains that the seven deadly sins all function differently within the text and the battle between good and evil is confused due to the unsure footing that both the reader and the characters find themselves treading upon.

Much of the distortion of reality and subsequent revelation and action revolving around the seven deadly sins occurs as a result of the manipulative efforts of Iago and it is useful to both examine how this occurs and finally, how these elements of Othello can be placed into the larger context of Shakespearian and Elizabethian literature in general. It should be constantly kept in mind that the Church and sin were in the forefront of the public’s consciousness throughout the time of Shakespeare and Marlow, thus eliminating the seven deadly sins as a paramount concern would be inappropriate.

Iago Shakespeare’s most fascinating villain is both his apparent lack of genuine motivation to create such chaos combined with his position as a “puppeteer” who incites the victims of his deception to perform the actual acts of sin in which he himself is either too cowardly or too clever to dirty his hands with.

Unlike other infamous archetypal Shakespeare villains such as the gluttonous and envious Lady Macbeth, for instance, Iago’s lack of clear motivation (other than an ingrained sense of pure malice) separates him from other characters encountered found throughout Shakespeare and other Elizabethian literature and presents the reader with a struggle to find the ways in which the seven deadly sins which are carried out under the direction of Iago, the ultimate “Satanic puppeteer” behind the action. Instead of being the primary instigator behind the seven deadly sins evidenced in the text, Iago successfully manipulates the sense of innate trust the other characters, Othello in particular, bestow upon him.