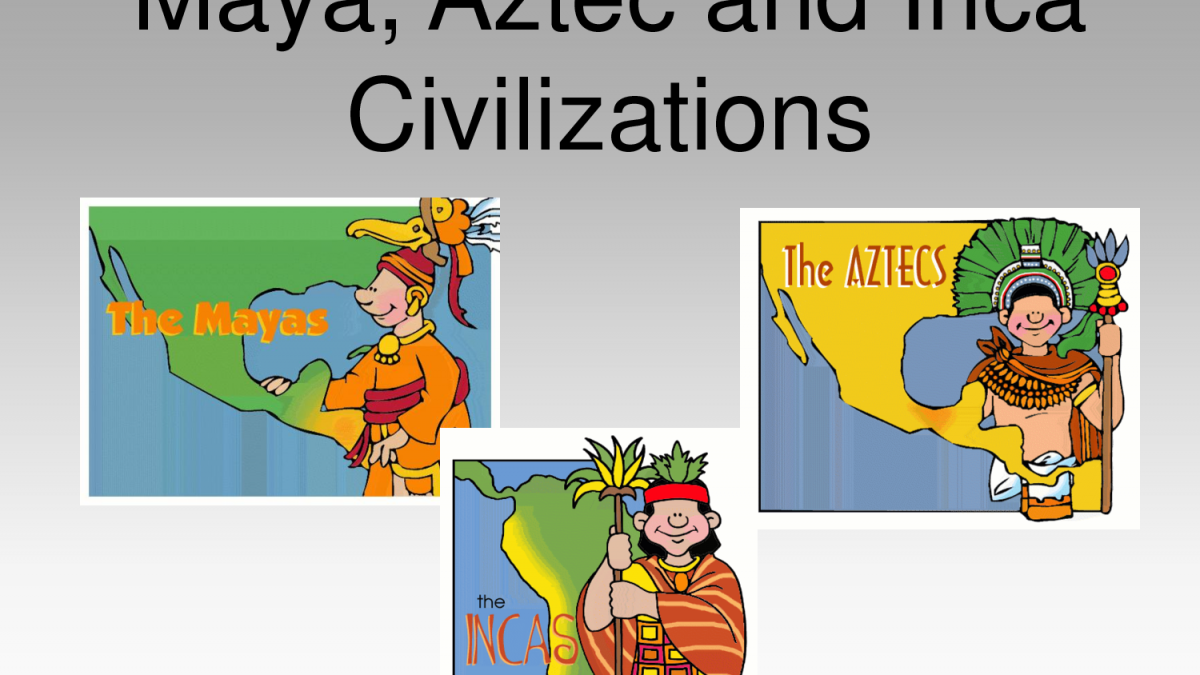 Civilization in Aztec Inca or Maya. Determine the civilization you would choose to live in—Aztec, Inca, or Maya. Write a complete paragraph explaining your choice, using at least three facts from the lesson about life in that society.

Civilization in Aztec Inca or Maya

Write a complete paragraph explaining why you did not choose the other two civilizations. Use at least one fact from the lesson for each civilization in your explanation.

The Maya, Aztec, and Inca Civilizations

The Maya Civilization was one of the most prominent pre-Columbian civilizations in Mesoamerica. It was located around modern-day southern Mexico and the Yucatan peninsula as well as Belize, Guatemala, and parts of El Salvador and Honduras. The Maya civilization began early as 2000 BCE and continued to thrive for about 3000 years until Spanish conquest in 1519 CE.

The Maya were a collection of city-states, each ruled by kings and priests. They built massive step pyramids out of limestone that served as temples to their gods. Religion was at the center of their culture and dictated every aspect of daily life. They practiced sacrifices in the temples to appease the gods, including human sacrifices! The cities also included palaces, homes, markets or plazas, and game courts for their favorite game “Pok-a-Tok”. This game was popular throughout Mesoamerica and was played with a rubber ball on a large court with stone hoops.

Surrounding the cities were farmland with sophisticated methods of irrigation to produce crops such as maize (corn), beans, squash, tomatoes, chili peppers, cacao (chocolate), and avocado. The Maya had tools made from wood, stone, and obsidian, a volcanic rock. They also farmed cotton, which they used to weave textiles for blankets and clothing.

They used vegetable dyes to make their clothing colorful and also decorated with fringe, feathers, and jewelry. In addition to elaborate clothing, the Maya created beautiful art in the forms of sculptures, relief carvings, and wall paintings (frescoes). They used jade and obsidian in carvings and beadwork.

The Aztec Civilization was located east of the Maya, in central Mexico. They were at their height from 1428-1521 when they were conquered by the Spanish conquistadors led by Hernan Cortes.

The Aztecs were a diverse set of city-states similar to the Maya. The largest city-states, Tlacopan, Tenochtitlan, and Texcoco banded together in 1428 to form what would become the Aztec empire. They shared a language, Nahuatl, which is still spoken today. In time, the Mexica conquered the other tribes and city-states to bring them under one rule with Tenochtitlan as the capital.

The empire stretched from the Pacific Ocean to the Gulf of Mexico in central and southern Mexico. Tenochtitlan was a vast city on an island in the middle of Lake Texcoco. There were massive temples and an urban center. The Aztec built aqueducts, canals, dams, causeways, and roads that connected the entire empire. These roads allowed for trade of goods and customs across thousands of miles. By the early 1500s, the Aztec empire had 5-6 million people!

The Aztecs were advanced in agriculture and irrigation and grew crops such as maize, beans, squash, potatoes, tomatoes, and avocados. They even built floating gardens, or Chinampas, around Tenochtitlan so that there would be more area to grow food, as the land around the island was swampy. Chocolate and popcorn were widely eaten, the same as they are today!

The Aztecs were progressive in the sense that they were one of the first civilizations to provide for every child (regardless of social status) to attend school. They had a written language and, similar to the Maya, wrote books called codices. Much of what we know about the Aztec civilization comes from these codices. Similar to the Maya, they played a game with a rubber ball and stone hoops named tlachtli. The Aztecs used herbs as medicines and methods such as steam baths to cure sicknesses. They even developed the use of splints for broken bones.

Unlike the Maya and the Aztec, the Inca Civilization was not located in Mesoamerica, but in South America. The Inca developed along a long strip of the western side of South America along the Pacific Ocean. It included the rugged mountains and high plateaus of the Andes as well as the coastal deserts and the Amazon jungle. At its height, the Inca Empire stretched from the border of Colombia to Santiago, Chile!

This massive empire had more than ten million people and included modern-day Peru, western Ecuador, western and south central Bolivia, northwest Argentina, and northern Chile. The capital of the empire was in Cuzco, established in the 12th century, and still a major (and beautiful!) city in Peru.

The Inca developed an extensive network of roads to connect all the conquered peoples in their empire. They built roadways along the coast and through the mountains. They were masters at building suspension bridges to span the deep canyons and cliffs. The Inca also built aqueducts to bring water from the mountains through the hills and valleys to the people.

One aqueduct was 360 miles long! Like the Maya and the Aztec, the Inca build massive palaces, temples, and fortifications. They used a “dry stone” technique that fit the stones together so perfectly that they did not need mortar. The city of Machu Picchu built high on top of a mountain is a famous example of Inca architecture that remains a popular tourist destination.