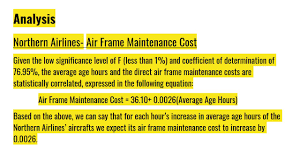 (a)   Develop a regression model to predict the price of stock 1 based on the Dow Jones Industrial Average.

model and predict the harvest for 2016 given that the total rainfall was 6.45 inches. Critique your prediction.

Average.
(c)   Which of the two stocks is most highly corre- lated to the Dow Jones Industrial Average over this time period?
4-33 Annual rainfall plays an important role in corn agri- culture. The drought of 2011 literally affected corn prices for years. Given the following data, build a
Case Study North–South Airline

In January 2012, Northern Airlines merged with Southeast Air- lines to create the fourth largest U.S. carrier. The new North– South Airline inherited both an aging fleet of Boeing 727-300 aircraft and Stephen Ruth. Stephen was a tough former Secre- tary of the Navy who stepped in as new president and chairman of the board.

Stephen’s first concern in creating a financially solid com- pany was maintenance costs. It was commonly surmised in the airline industry that maintenance costs rise with the age of the aircraft.

He quickly noticed that historically there had been a significant difference in the reported B727-300 maintenance costs (from ATA Form 41s) in both the airframe and the engine areas between Northern Airlines and Southeast Airlines, with Southeast having the newer fleet.

On February 12, 2012, Peg Jones, vice president for op- erations and maintenance, was called into Stephen’s office and asked to study the issue.

Peg was to report back by February 26 with the answer, along with quantitative and graphical descriptions of the relationship.

Peg’s first step was to have her staff construct the average age of the Northern and Southeast B727-300 fleets, by quarter, since the introduction of that aircraft to service by each airline in late 1993 and early 1994.

The average age of each fleet was calculated by first multiplying the total number of calendar days each aircraft had been in service at the pertinent point in time by the average daily utilization of the respective fleet to determine the total fleet hours flown.

The total fleet hours flown was then divided by the number of aircraft in service at that time, giving the age of the “average” aircraft in the fleet.

The average utilization was found by taking the actual total fleet hours flown on September 30, 2011, from Northern and Southeast data, and dividing by the total days in service for all aircraft at that time.

The fleet data are shown in the following table. Airframe cost data and engine cost data are both shown paired with fleet average age in that table.

Discussion Questions
1.  Prepare Peg Jones’s response to Stephen Ruth.
Note: Dates and names of airlines and individuals have been changed in this case to maintain confidentiality. The data and issues described here are real.

North–South Airline is a prime example of how successful conversion rate optimization strategies can be. In this case study, we will take a look at the different tactics they used to increase their conversion rates and generate more revenue.

Their approach was comprehensive and well-rounded, and it resulted in impressive results! We’ll discuss each of their strategies in detail and provide actionable advice that you can use to improve your own website’s conversion rate.

North–South Airline is a great example of how important it is to have a solid conversion rate optimization strategy. By taking the time to carefully analyze their website and user behavior, they were able to identify areas that needed improvement.

One of the most important aspects of North–South Airline’s success was their focus on mobile users. In today’s world, it’s essential to have a mobile-friendly website if you want to be successful.

North–South Airline recognized this and made sure their site was optimized for mobile devices. This allowed them to reach more potential customers and generate more revenue.

Another important aspect of their success was their use of social proof. They displayed customer testimonials prominently on their website, which helped to increase trust and confidence in their brand.

Overall, North–South Airline’s successful conversion rate optimization strategies can be attributed to their comprehensive approach and focus on the user experience.

By taking the time to improve their website and make it more user-friendly, they were able to reach more customers and generate more revenue. If you’re looking to improve your own website’s conversion rate, then you should definitely take some inspiration from North–South Airline!

To improve your own website’s conversion rate, focus on the user experience. Make sure your site is mobile-friendly and easy to navigate. Use social proof, such as customer testimonials, to increase trust in your brand.

And finally, offer a money-back guarantee to further increase conversion rates. By taking these steps, you can improve your website and reach more potential customers.

North–South Airline’s success story is a great reminder of how important it is to have a solid conversion rate optimization strategy. If you want to be successful, you need to take the time to analyze your website and user behavior, identify areas that need improvement, and then implement changes that will result in a higher conversion rate.

With a little effort, you can see a big difference in your website’s performance!

If you’re looking for more tips on how to improve your website’s conversion rate, then be sure to check out North–South Airline’s case study. Their story is a great example of what can be achieved with a well-thought-out strategy.

By taking the time to improve their website and focus on the user experience, they were able to reach more customers and generate more revenue. If you want to achieve similar results, then you should definitely take some inspiration from North–South Airline!

-Focus on the user experience

-Make sure your site is mobile-friendly

-Use social proof to increase trust in your brand

By taking these steps, you can improve your website’s conversion rate and reach more potential customers. So what are you waiting for? Start implementing these strategies today and see the results for yourself!