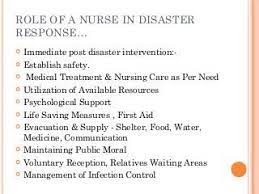 As a nurse, you have unique responsibilities related to planning and response during disaster and emergency situations.  It is important to understand your role prior to a disaster situation occurring.

As a nurse, you have unique responsibilities

As a nurse, you have unique responsibilities related to planning and response during disaster and emergency situations.  It is important to understand your role prior to a disaster situation occurring.

…….i work in a rehabiltation hospital as a staff or floor nurse , one of role will be help coordinate evacuations and the transportation of patients to other medical facilities.

Disasters are defined in many ways. The World Health Organization (WHO, n.d.) defines disaster as “a situation or event, which overwhelms local capacity, necessitating a request to the national or international level for external assistance.”

The United States Department of Homeland Security (USDHS) defines it as an emergency that “requires responsive action to protect life or property” (USDHS, 2008, p. 138). Hammond, Arbon, Gebbie, & Hutton (2012) summarize these definitions in their statement that

A disaster is a serious disruption of the functioning of a community or a society involving widespread human, material, economic or environmental losses and impacts, which exceeds the ability of the affected community or society to cope using its own resources.” (p. 236)

Simply put, a disaster is a catastrophic event that overwhelms available resources. Disasters can be natural or anthropogenic (caused by human activity). In May 2016, a fire in Fort McMurray, Alberta, destroyed 2,400 structures in the area, forcing more than 90,000 people to evacuate the region.

The fire grew so much that at one point it was creating its own weather and required firefighting reinforcements from across the country. All the stores and amenities in Fort McMurray were closed . . . and residents were told to boil their water. (Morgan, 2016)

Natural disasters such as tornadoes, earthquakes, floods, and extreme winter conditions occur more frequently than anthropogenic disasters such as civil unrest, terrorism, and armed conflict; in 2015, there were 376 naturally triggered disasters registered (Guha-Sapir, Hoyois, & Below, 2015).

Planning for any type of disaster requires consideration of common elements including mitigation, preparedness, response, and recovery.

Disaster mitigation measures are those that eliminate or reduce the impacts and risks of hazards through proactive measures taken before an emergency or disaster occurs. It begins with identifying the risks. Health care leaders need to evaluate potential emergencies or disasters that could impact the demand for their services and supplies, then develop a plan that will address those needs.

The building of the Floodway was a joint provincial/federal undertaking to protect the City of Winnipeg and reduce the impact of flooding in the Red River Basin.

It cost $60 million to build in the 1960s. Since then, the floodway has been used over 20 times. Its use during the 1997 Red River Flood alone saved an estimated $6 billion. The Floodway was expanded in 2006 as a joint provincial/federal initiative. (2015)

Hendrickson & Horowitz, (2016) explain that hospital facility planners and health leaders should address those disasters that are most likely to occur in their community and geographic area and perform a hazard vulnerability analysis to determine the likely vulnerabilities that may arise in their facility from those disasters.

A hazard vulnerability analysis (HVA) is defined as a systematic approach that:

Area hospitals would need to have functional decontamination units, as well as an abundant supply of ventilators, oxygen, and specific antidotes that are not typically available in large quantities. Natural disasters often result in increased numbers of homeless or displaced persons whose everyday medical needs may be exacerbated by limited access to routine health care.

This may result in emergency departments experiencing an influx of patients seeking medication, treatments, and assessments.

The results of an HVA can be used to develop and streamline disaster plans. These plans should be designed using an interdisciplinary approach, including partners from local police, emergency, and fire services.

HVAs should be conducted on an annual basis, or whenever there are demographic or infrastructural changes that may impact the potential of a disaster.