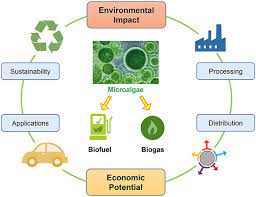 Analyse the micro environment of Alga

What is Algal growth?

Algae grow by photosynthesis. The requirements for growth is sunlight and nutrients such as phosphorous and nitrogen. In abundance of nutrients, excessive algae growth is experienced which can also lead to adverse effects on the ecosystem (Yang, 2008). Countries with coastline on to the Mediterranean Sea {roughly between 45 and 30 N} are the most suitable locations for algae farms. These are the countries that are located in the south of Mediterranean.

These countries experiences warmer climates and the temperatures here do not go below 15°C throughout the year. This type of climates facilitates well algae growth in opened or closed ponds. It is called macro algae when it is made from seaweed or rather seaweed oil. Algae have potential for future bio economy, landless food production and an overall social – economic impact of an algae industry.

As the ecosystem, algae are the starting point of most of the food webs in the aquatic ecosystems. The biomass productivity of many algal species is higher compared to that of terrestrial plants. They can be efficiently cultivated without antibiotics and use of pesticides in fresh or seawater. These factors, as well as their high content of vitamins, polyunsaturated fatty acids, and other healthy compounds, have led to increasing consumer consumption. Another first line of improvement for the near future is related to the scalability and costs of microalgae cultivation.

Additionally, cultivation of freshwater algae should take place either in urban areas, ideally as part of wastewater treatment, or in humid climate zones, where freshwater is not a limited resource. In such areas, open pond “microforms” could help to fight malnutrition locally and make farmers independent of increasing prices for arable land and fertilizers (Rahmann et al. 2020).

However, the following factors affects the growth of algae: light, temperature, mixing, and nutrients/nutrient ratios can all impact the types of algae you have.

What are the micro-environment of algal biomass yield?

Despite the various benefits of microalga technology, the world produces less than 20,000 tonnes of microalga biomass annually. Most algae are produced in raceway ponds since open systems require less capital to develop and run than closed reactors. Raceway ponds, however, have a number of drawbacks, including the usage of high water volumes per unit area and contamination (by atmospheric pollutants and competing organisms).

How do we produce the Algae biofuel?

Algal fuels: It is also called algal biofuel or algal oil. It is an alternative to liquid fossil fuel that uses algae as its main source of energy rich oils. They are alternatives to biofuel sources such as corn and sugarcane.

Algal biomass is mostly composed of lipids, natural oils, proteins, and carbohydrates (Maddi, Varanasi, et al., 2011). Microalgae are the only focus of the algae-to-biodiesel industry since the majority of the natural oil produced by them is triacylglycerol, the ideal type of oil for manufacturing biodiesel. Microalgae can be used in a variety of various ways to produce energy in addition to biodiesel.

Biomass in biogas production: globally there is an increased awareness that there is an implementation of waste to energy technology to achieve sustainable energy development. One of the most popular conversation is the conversation of organic rich compounds into clean and renewable products by anaerobic digestion commonly known as AD. This method has an advantage because of having limited profitability.

This article gives a broad overview and then highlights a few algae bio refinery LCA studies from 2011 or earlier. These focus on lipid extraction and biodiesel production rather than the more current technologies of hydrothermal processing of the whole biomass. Even so, the reader gets a basic introduction to LCA and a few of its early applications to algae biofuels.   http://www.springer.com/us/book/9788132226390

Iodiesel Microalgal produced triacylglycerol and other lipids can be trans esterified into fatty acid methyl esters and are of substantial interest as biodiesel precursors (Scott et al., 2010). Under specific growing circumstances, several algae species can generate hydrogen gas. Algal biomass can also be anaerobically digested to create methane biogas, which can be burned similarly to wood in order to produce heat and electricity. Algal biomass may also undergo pyrolysis treatment to produce crude bio-oil.

Biomass energy sector: This is energy that comes from living things.  A good example is that the earliest cave men first made wood fires for keeping warm and cooking. Today it is used to fuel electric generators and running machineries. Biomass is organic – it is made of materials from living organisms such as plants and animals.  In our case, algae is the topic of our day.

Algae derives the energy from the sun: the energy is absorbed through photosynthesis. It is later converted to carbon dioxide and water into carbohydrates. Additionally, the biomass production suitability of various types of photo bioreactors is profiled. However, modest information is available regarding the influence of bioreactor types on the BP and DF bioprocess routes. Later, this is transformed into usable energy through direct and indirect means. It can be directly converted to electricity or indirectly into biofuel. The number of algae-producing companies in Europe has grown, but their impact is still low. Algae biomass production in the EU contributed less than 1 % to the global production of 30.4 Mt in 2015 (Camia et al., 2018).

What are the effects of algal biofuels production?

In conclusion, algae serves as a basis for most aquatic food webs. This fuels the growth of fish, insects, snails and many other aquatic animals. In turn, this produces substantial benefits for human who profits from the aquatic products. It is most common in the USA where it is readily available as a dietary supplement. It is used to:

Related Article: How adaptations allowed plants to move from an aquatic environment