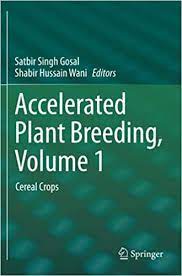 Accelerated Soybean Breeding. Scientific literature review of accelerated soybean breeding through the use of compact growth chambers and genetics.

Scientific literature review of accelerated soybean breeding through the use of compact growth chambers and genetics.

Here, we present a method for accelerating breeding of soybean in a compact growth chamber, which greatly reduces the generation time and facilitates rapid breeding and research projects.

The recently reported speed breeding methods (Watson et al. 2018) have not been applied to short-day soybean plants; however, our method can reduce the generation time of the soybean cultivar Enrei, the best-characterized Japanese cultivar, to just 70 d (Fig. 6).

This breeding approach therefore allows up to 5 generations per year, instead of the 1–2 generations currently possible under field and greenhouse conditions. Moreover, our method allows the highly efficient controlled crossing of soybean lines under laboratory conditions, enabling researchers and breeders to work consistently year-round, whatever the weather or season.

Schematic representation of our method for accelerating breeding in soybean (cv. Enrei) in a growth chamber supplemented with CO2. The appropriate combination of a 14 h light (30ºC)/10 h dark (25ºC) photoperiod and >400 p.p.m. CO2 concentration, with the use of immature seeds, reduces the generation time to 70 d, thereby achieving up to 5 generations per year in soybean.

Our breeding method uses supplemental CO2 in combination with appropriate light and temperature cycles to accelerate the growth and development of plants, and the reaping and sowing of immature seeds to greatly shorten the generation time further in the growth chamber.

The compact chambers (0.4 m3) used in this study are widely used for Arabidopsis research, thereby enabling plant researchers to shift their focus from this weedy model plant to soybean, a staple crop. Since the light intensity derived from general purpose fluorescent lamps was just 220 µmol m–2 s–1 at the canopy level in the growth chamber used in this study, the lighting costs (for both the light source and the electricity) would be lower than those described in recent speed breeding protocols, which use high-power light-emitting diodes (LEDs) providing light intensities of 340–650 µmol m–2 s–1 (Watson et al. 2018).

Furthermore, our method uses a 14 h light period, which is much shorter than the 22 h period required by other speed breeding methods (Watson et al. 2018), contributing further cost savings.

So far, it has been difficult to obtain enough high-quality soybean flowers to perform effective crossings in artificial conditions, due to the less vigorous growth of plants compared with those in the field. We demonstrated that CO2 supplementation enhances the quantity and quality of both vegetative and reproductive growth in soybean plants in the growth chamber (Figs. 2, 3; Supplementary Figs. S3, S4), and allows for the highly efficient controlled crossing of soybean.

Thus, the appropriate combination of supplemental CO2, light and temperature conditions with the use of immature seeds would allow reduction of the generation time of Enrei from 102–132 d in the field (Yamada et al. 2012b) to just 70 d.

Considering the previous findings that Enrei is a weakly photosensitive cultivar (Ozawa et al. 2017) and that comparatively higher temperatures accelerate the flowering times in soybean plants (Hadley et al. 1984), our data suggest that the temperature setting used in this study plays a more important role in the reduction in the days to flowering of Enrei.

On the other hand, soybean plants are generally photosensitive, and thus there are variations in the days to flowering in soybean cultivars. However, although the cultivars used in this study, Enrei, Williams82 and BR16, greatly vary in cultivation areas (Alliprandini et al. 2009, Yamada et al. 2012b, Wolfgang and An 2017) (Supplementary Fig. S1), we showed that in these distinct cultivars, the days to flowering can be reduced with our method (Supplementary Fig. S5).

As the latitude of cultivation areas and growth habits mainly depend on specific genotypes (Bernard 1972, Tian et al. 2010, Maldonado dos Santos et al. 2016, Langewisch et al. 2017), these findings suggest the possibility that our technique is of general application in a wide range of soybean cultivars.

Given that each soybean cultivar can be cultivated only in limited latitudes (Watanabe et al. 2012), the photoperiod conditions among the parameters in our method needs to be adapted for each cultivar.

Alongside other protocols for speed breeding and effective phenotyping (Kuroda and Ikenaga 2015, Watson et al. 2018), the parameters used in our method could be optimized for a variety of species, cultivars, accessions and experimental designs to facilitate cutting-edge breeding in a wide range of crops.